It’s is apple week this week here at RMK! Fall is my most favorite season and I love the flavors of the season too. So I have all apple recipes lined up for this week starting with these apple pie egg rolls. Then, I have a pumpkin week planned for October.

This recipe takes the flavors of apple pie and incorporates them into an egg roll. They are filled with a tasty apple filling and rolled in cinnamon sugar. Then, I topped them with caramel dip (I like caramel dip because it is thicker) and served with a scoop of ice cream! So delish and so easy! 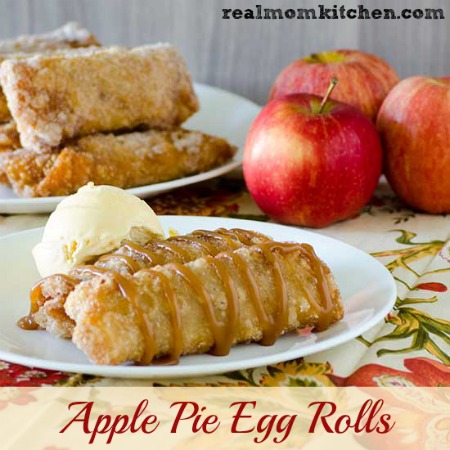 Recipe adapted from Spend with Pennies.

Your delicious recipe has been nominated as one of the “Top 100 Best Apple Recipes of 2014 for National Apple Month”. You and your readers can vote for it here: https://thefoodexplorer.com/fruit-2/100-delicious-apple-recipes-for-national-apple-month/ (position #72 – random order).

[…] the top peach pie maker in our part of the state has been named, it's time to find the tastiest apple pie around. Emily Meshumar of West Windsor won the competition for northern New Jersey for her Vegan […]