To start the year off with a bang, Tillamook is hosting an online contest for fans to win a complete Tillamook Fridge Makeover aka ‘Mookover’. 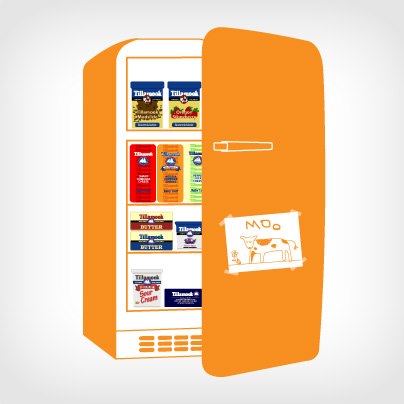 January  7-18, fans can submit email nominations to [email protected] for who they believe is the most deserving of a Tillamook fridge makeover and why. Think of it as a cheesy act of kindness among friends. Tillamook will select one winner to receive a prize pack of Tillamook products worth over $100, including Tillamook’s all natural, hormone-free cheese loafs, slices, butter, yogurt, sour cream and ice cream. This year, the person who sends the winning nomination will also receive a prize pack. 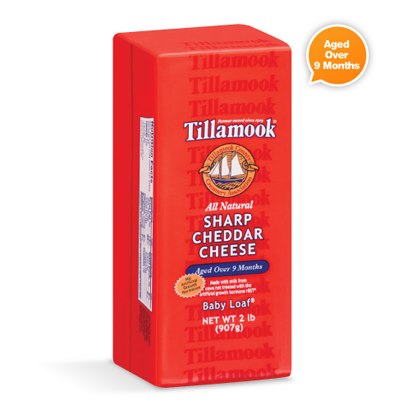 Tillamook has also provided  a ‘Mini-Mookover’ giveaway for one lucky RMK reader. The prize includes 7 free Tillamook product coupons including:

. This contest is open to US Residents. Winner will be announced at the end of this post following the entry deadline.

Disclosure: I am also being sent a ‘Mini Mookover’ prize pack.

Winner of this prize pack Valerie who said: Their sharp cheddar is amazing!

Congrats Valerie and watch for an email on how to claim your prize!

I’d most like to find the 2 lb Sharp Cheddar Tillamook Cheese in my fridge because we LOVE cheddar with crackers, fruit, bread, or just by itself. YUM!

Definately the cheese! I’m a cheese fanatic and love the idea of hormone free! PLUS… i just like trying new things! 🙂

I love the cheddar cheese and find a way to put it on just about everything!

I’d be excited about the ice cream because it’s our favorite after dinner treat.

I’d like ice cream to cover something baked with butter!

Love the sharp cheddar Tillamook makes! Great in recipes, on sandwiches and just as a snack.

I would love to have the cheese in my fridge!

Definitely the ice cream; I have a sweet tooth!

Chaeeezzzzzzzze if you please. Yummo. All the wonderful cheese.

I am most excited and obsessed with tillamook cheese, I love it so much I buy the 2lb size at Costco. I also love their yogurt

I would be most excited to see a 1 lb Tillamook Butter in my fridge…I am such a butter person!

I love Tillamook cheese! I’d love to have the sharp cheddar in my fridge! (Though it wouldn’t stay there long.)

Sharp Cheddar – it is my favorite cheese!

The cheese slices go on our sandwiches every day. We love them. Ice cream is always a good choice too.

Ice Cream all the way! 🙂

I’d love the ice cream to go on some of the other treats I could make with the butter!

I’d love to try the Tillamook Yogurt because I’m a big yogurt fan.

Definitely the sharp cheddar block! I love the cheese!

Our family loves the tilamook sliced cheese! It sure makes our sandwich making process so much easier!

the sharper the cheddar the better! yum!

I love yogurt so I would love to try their brand.

I would like to see the Sharp Cheddar Tillamook Cheese!
jslbrown_03 at yahoo dot com

I’d love to see the 2 lb Tillamook Cheese. We are huge cheese fans :). Thanks!

I love the sharp cheddar!

Sharp cheddar. we love that for mac & cheese. 🙂

The ice cream! I didn’t know they made it. The cheese and butter sound delish, too. 🙂

The Ice Cream!! We just got a WinCo here and it’s the Only store here that sells it, but it’s never cheap enough for me to buy it, but I always stop and look at all the flavors every time I’m there.

It’s a toss-up between the sharp cheese or the ice cream since we can’t keep either in our fridge for long.

Sharp cheddar! A favorite in our house!

I grew up in the Northwest. Living in the South, I miss seeing Tillamook products at the grocery store. My favorite ice cream is Udderly Chocolate. Yummy!!! Anything Tillamook would make me happy!

I would love to see the Tillamook butter because butter makes everything better!

I would love to see the Tillamook butter

The sharp cheddar cheese! We just recently switched back over to Tillamook cheese (after using off-brand for a couple years to make our grocery budget happy) and it is so worth it. Even my 2 year old will only eat the good stuff now.

Tillamook and I go way back. It kept my struggling family fed on the cheap while providing taste to so many plan foods. I love the black label sharp cheddar. My mother would buy it for me on my birthday every yr.

The 2lb Tillamook Cheese for me please because I love their cheese and use a ton of it on breakfast, lunch and dinners.

Cheeses for me please. So much ways to enjoy it.

Either the ice cream or the yogurt!

i would love to win the cheese package my grandaughters love the cheeses and so do i..<3

LOVE Tillamook, but if I had to pick one it would be their mint ice cream because I haven’t had it in years!

I would pick the sharp cheddar but my husband definitely would say “ice cream”.

I would have to go for the Cheese! We love cheese at my house!

If I was choosing for my family it would have to be the sharp cheddar my hubby loves. But, for me I would have to choose the butter, I love the flavor in whatever it’s used for!

I love Tillamook dairy products! The one item I have not had before and would be very excited to try is the ice cream.

I am having a hard time picking between the 2 lb. of cheese or the ice cream. Thanks for the chance to enter.

Their sharp cheddar is amazing!

Even though I LOVE ice cream, I would have to say the Sharp Cheddar Cheese. I used to not like it a long time ago but my father converted me to sharp cheddar and I absolutely love it!

I would be most excited for their sliced cheese. I actually already buy that for my boys’ school lunches cause they’re the perfect size and make sandwich making a breeze. (And barely more expensive than a block of cheese.)

Love to try the icecream, love their cheese! [email protected]

I would love all of it in my fridge but may be most excited to see the ice cream!!!! thanks
carolwegs at gmail dot com

I would most like to see Sharp Cheddar Tillamook Cheese because I am a huge fan of sharp cheddars and have some recipes lined up this would be perfect for!

Ever since we lived out in Washington State we became lover’s of Tillamook Cheese especially the smoked sharp cheddar. Once we moved out to MI we can’t find the same quality of cheese. Winning this would surely make our family happy.

The sliced cheese – I love to have a delicious sandwich for lunch and pre-sliced cheese in lots of varieties makes it that much better.

I love Tillamook! It’s a tie between the sharp cheddar and ice cream. Yum!

The Sharp Cheddar is my favorite!

I love Tillamook products! I’ve visited their factory in Tillamook, Oregon. Their ice cream is my favorite though, I would be most excited about at that.

I would love the block of sharp cheese. Being a Wisconsin born girl, I am a total cheese hound! 🙂

Only because I still have a half pound of the sharp cheddar still in my fridge. (Best for mac and cheese)

The ice cream sounds super yum. I had no idea they made ice cream! (Although it would make since, you know, cause it’s all moo juice.)