Today’s fab five is about TV shows.  I had fun with your responses when I recently talked about White Collar, I thought is would be fun to chat about some other shows.  My hubby and I try to have 1 hour of down time that we spend together each night.  Thanks to DVR’s we can watch one of our favorite shows and the news in that hour.
A lot of the shows we use to watch were no longer on so we were looking for some new ones to watch this last fall. The first one we started watching is Person on Interest on CBS.  The show is considered a “crime thriller. The two main Characters are Finch and Reese.  Finch is a billionaire who invented a program to predicts people who will be involved in a violent crime based on patterns.  The people the machine predicts could be the cause of the crime or the victim.  Reese is a former CIA agent that is presumed dead but ends up crossing paths with Finch.  The two end up teaming up and using their skills to stop these possible future violent crimes. Reese, who  is played by Jim Caviezel, reminds me of a modern day Clint Eastwood in the role.

Next up is Unforgettable also on CBS.  Poppy Montgomery plays the character Carrie Wells.  Poppy has gorgeous red hair and guns that I envy.  Her character Carrie has a rare condition where she remembers everything.  She can replay anything in her life in her mind except for the details of her sister’s death.  She ends up becoming a detective for for NYPD and uses her gift to help solve crimes.

Body of Proof is another good one we found on ABC.  Megan Hunt (Dana Delany) use to be an outstanding neurosurgeon but after an injury from an auto accident she is forced to give up surgery.  She moves over to the Medical Examiners office to to use her knowledge  to solve medical mysteries. 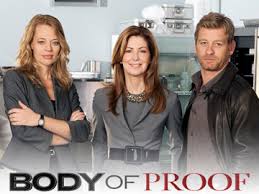 A Gifted Man filled my void from Medium being taken off the air.  Michael Holt is an outstanding surgeon and is very career and money driven.  His life is changed after his ex-wife Anna is hit by a car and killed.  He is soon roped into helping a clinic she ran and begins to get visits from her.  Is Michael loosing his mind or is Anna’s spirit there to help?

Last is a show that has been around a bit, Fringe (found on Fox).  I do enjoy some science fiction.  This show explores the idea of parallel universes and what would happen if  someone from another universe did something to alter the other universe. Walter, Olivia, and Peter (Joshua Jackson – he’s a cutie) help solve the mysteries of the strange events occurring as part of “The Fringe” division with the government.  I am a big fan of JJ Abrams and he is the creator this show.

That is too funny that I watch all, but one of these shows. Body of poof is the one I don’t watch. I will have to look into that one now! i will say I do love revenge it is so fun to watch.

I love Fringe – it’s one of my favorites. I fear though since they almost didn’t renew for season 4, that this is going to be the last season. 🙁

Thanks for the reviews! I’m always looking for something new to watch!=)

I started watching Fringe just because I grew up in the Dawson’s Creek era and wanted to get my “Pacey” fix! Haha! But now I’m hooked! I also started watching Unforgettable because I like Poppy Montgomery’s acting in Without a Trace. She does a good job in this new show too. But my absolute favorite new show this year is Revenge! I love, love, love that show. Very addicting and keeps you on the edge of your seat!

wow, we have very similar tastes. I watch all of them except for Fringe. Definitely check out Royal Pains

I love white collar and also enjoy a gifted man both great shows if you like medical shows that have a bit of comedy in them try watching Royal pains on USA it is also a great show. I also love Fairly legal a show about law mediation which returns to the USA Network in March. it is also a bit funny . I consider both Royal pains and Fairly legal and Royal pains drama comedies. If you like action shows try watching leverage a show about a group of con artists theives who now use what they know to do good and help people. It is in reruns now on TNT so it is the perfect time to catch up with the show.

I used to really like Unforgettable, but it has started to feel a bit formulaic. Crime happens, and only Carrie can remember the key details for solving the case.
I was also a huge mega fan of Lost. Then the last episode drove me insane and I have a hard time watching shows with actors from Lost in them. I do really like Fringe though. Hopefully JJ Abrams won’t ruin that show in the last season like he did with LOST.
(Amanda A: I’m enjoying once upon a time and Grimm too!)

I love Unforgetable and Body of Proof. Haven’t seen the other shows. I know the concept of Fringe but never got in to it. I LOVE Once Upon a Time and Grimm

I love Unforgettable! Great show and her hair is gorgeous!!!

I’ve never seen any of these. I better get started!

I love Fringe {and Peter! :-)} but am somewhat underwhelmed by this season. I miss seeing Peter and Olivia working closely together…this whole “I don’t remember you” story line is getting old to me, and I wish it was back to normal. Not to mention missing the whole Peter/Walter relationship. I’ve got a couple episodes on my DVR waiting for me, so maybe something has changed?
My husband’s favorite show is Person of Interest, he LOVES it! I have to admit, I just watched it because it had Ben from Lost on it, and I still have Lost withdrawls. 🙂 It’s a good show, but could Reese be any more monotone? I know that’s his character, but it drives me a little crazy sometimes!

We have very similar viewing habits! Alcatraz just premiered this past week (and it’s another JJ Abrams show – as is Person of Interest!) and my husband and I are sucked in already!